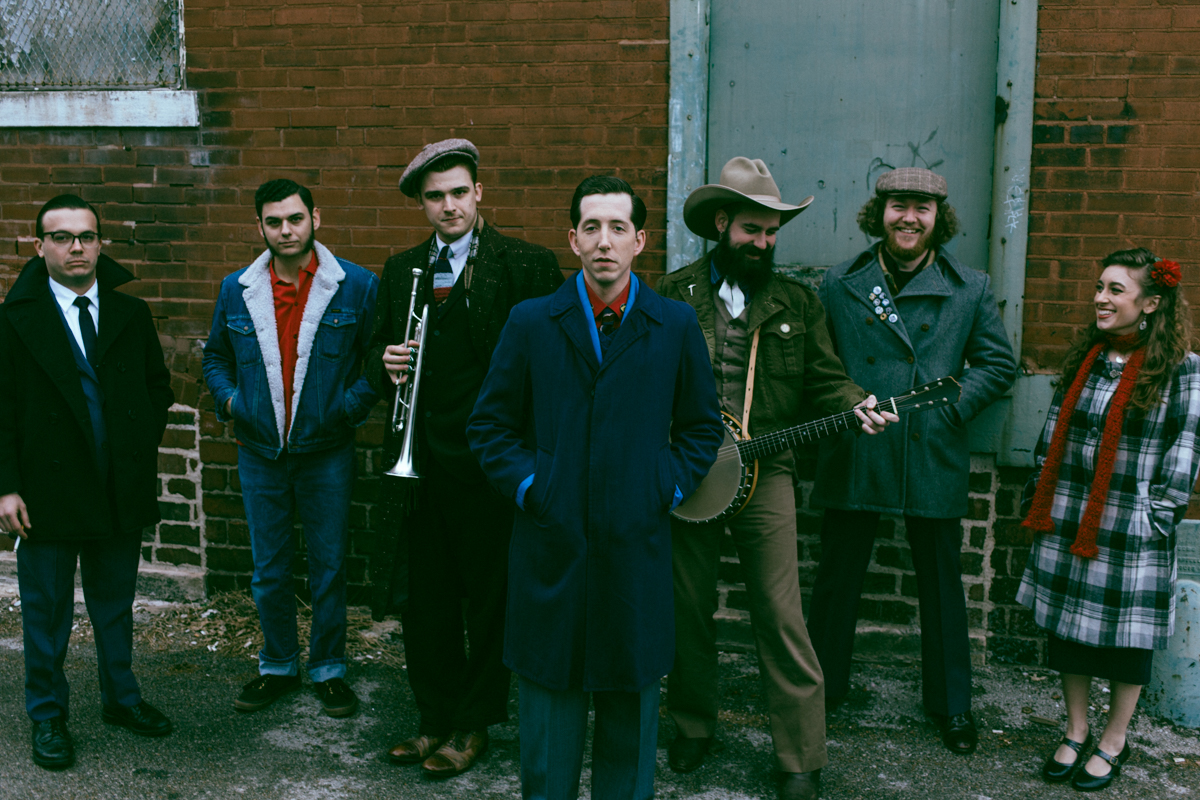 “It really feels like I’m taking a big step forward on this one,” Pokey LaFarge says of Something in the Water, his seventh album and his Rounder debut. “While we were recording it, I kept thinking, ‘Hey, we’re really onto something here.’”

Indeed, the dozen-song set marks a new landmark in a career that’s already filled with musical highlights. The St. Louis-based singer, songwriter, and multi-instrumentalist draws from a deep well of American musical traditions to create distinctively personal music that’s timeless rather than retro, transcending the confines of genre in a manner that reflects the artist’s openhearted attitude.

Incorporating elements of early jazz, ragtime, country blues, Western swing, and beyond, LaFarge has created a vibrant, deeply expressive body of work that embodies an expansive musical vision and vivid storytelling sensibility that are wholly his own. He’s also earned a reputation as a tireless, uniquely charismatic live performer, winning a loyal international fan base that regularly packs his rousing, celebratory live shows.

Since he began recording in 2006, Pokey has maintained an indefatigable work ethic that’s yielded a wealth of compelling music. After making a grass-roots splash with his self-released debut album Marmalade and moonlighting as mandolinist with the Hackensaw Boys, he continued to gain notoriety with his widely acclaimed longplayers Beat, Move, and Shake, Riverboat Soul and Middle of Everywhere—the latter two were both named Best Americana Album by the Independent Music Awards—and the concert set Live In Holland.

Longstanding admirer Jack White added LaFarge to the roster of White’s Third Man label for the 2011 EP Chittlin’ Cookin’ Time in Cheatham County (which White produced) and the 2013 album Pokey LaFarge, as well as enlisting Pokey as opening act on the North American tour in support of White’s Blunderbuss album. Also in 2013, Pokey was featured on the soundtrack of HBO’s Boardwalk Empire, performing the jazz standard “Lovesick Blues” with Vince Giordano’s Nighthawks. 2014 was LaFarge’s busiest year yet, with the hard-working artist performing on five continents, including tours in India, Australia and New Zealand as well as extensive roadwork in the United States, Canada, UK, Ireland, and The Netherlands.

Something in the Water finds the artist doubling down on his established creative strengths, expanding and deepening his musical reach on such new originals as the wry, rollicking title track, the swaggering ragtime workout “Wanna Be Your Man,” the infectiously jazzy “Underground,” the evocative instrumental “Cairo, Illinois,” the exotic ballad “Barcelona” and the swinging album-closer “Knocking the Dust off the Rust Belt Tonight,” whose witty lyrics underline the album’s proudly Midwestern sensibility. Also featured are fresh, buoyant takes on popular blues standards “When Did You Leave Heaven” and “All Night Long.”

“The Midwest is at the heart of this record,” LaFarge asserts. “The people playing on these songs are from Wisconsin and Illinois and Chicago and St. Louis, and there’s a certain attitude that comes across in the songs and the way that they’re performed. I’m born and raised in the Midwest, and my family’s been here for generations. This is where I’m from and how I think, and that’s reflected in the music I make.

“Americans love to reinvent themselves, but you can never really get away from the place that you come from,” he continues. “And in a globalized world, I think that there are some parts of our regional identity that we should hang onto and cherish. I do buy into that old idea of the Midwestern work ethic, and it’s definitely something that’s been passed down through my family and something that I feel connected to, and it influences the way I approach making music.”

LaFarge teamed with kindred-spirit producer Jimmy Sutton to record Something in the Water at Chicago’s Hi-Style Studio. For the occasion, he recruited a diverse cast of talented players, including his own longstanding touring combo as well as members of such notable outfits as NRBQ, the Fat Babies, the Modern Sounds, and the Western Elstons. He designed the sessions’ communal recording approach to push himself creatively, while bringing several new musical elements—including the more prominent use of drums and vocal harmonies—to the table.

“I knew that I really had to challenge myself on this one, and to create a slightly different take on my music,” LaFarge notes. “The Third Man album put me on the map for a lot of people, so I was conscious that I wanted to take things to the next level. One thing that I really wanted to do this time was to emphasize the groove, and I was also thinking a lot about space and about juxtaposition. The ability to work with some different people took me out of my comfort zone, and Jimmy really challenged me and pushed me into some new places. And as I felt the spirit and the camaraderie that we all had in the studio, the whole thing took on a life of its own.”

The resulting album is the most powerful showcase to date for Pokey LaFarge’s peerless gifts as a songwriter, performer and entertainer.

“You try to make something that’s cool, something that’s sexy,” he observes. “But when you come down to it, you can really only make music for yourself, and I feel like this album is the first time that I was really able to do that. I’m 31 and I’ve been doing this for awhile, but I feel like I’m only starting to make the music that I’ve always wanted to make. I used to put a lot of pressure on myself when I was younger, because guys like Hank Williams and Bob Dylan and Otis Redding made so much great music when they were in their 20s. But now I feel like I no longer have that pressure, so I can just be myself.” Brothers Jack Torrey and Page Burkum grew up in northeast Minneapolis and have been blending their voices as The Cactus Blossoms since 2010. Their hypnotic harmonies and unforgettable songs have made them favorites in the Minneapolis–Saint Paul music scene. Their latest album, Live at the Turf Club, blurs the line between old and new as they sneak a few originals into their repertoire of early country and Western swing.

“The brother duet that America is waiting for”
Garrison Keillor